Super typhoon Yolanda slammed through the city of Tacloban on November 8, 2013, causing a gigantic storm surge and leaving in its wake more than 6000 dead, according to the press. Although, the locals say that closer to 10,000 died. In the terror of the moment, many cried out to God to save them and they’re alive today to tell their incredible stories.

Ron and Glenda, arrived a couple of months after the storm to see what could be done. Many relief organizations had already arrived but the people were still numb. Everyone knew of one or many who had perished and their hearts were hungry to hear the good news of Jesus.

That’s when God led Ron and Glenda’s son Isaac to pioneer the work. He found a house in one of the typhoon devastated areas and began to cultivate relationships with the children and the neighbours. He rented a house and fixed it up nicely to work as a youth centre, at the same time supporting fledgling churches that sprang up as a result of repentance after the big storm.

Isaac later moved to Cebu, but his sister Zoe and the new Ark staff Dan and Hazel took over the ministry, full of vision to see transformation in the neighbourhood.

They saw several baptism and many of the kids touched by God. During the time they were there, the President declared war on drugs and people began surrendering themselves to stay alive. As a result, the city mayors had an overflow of 2000 former drug abusers and no hands to care for them. The Mayor asked the churches for help and many of the leaders came together to help with the need. YWAM stepped up as did Hazel, one of the staff at the Ark Youth Centre. Hazel ended up being one of the head leaders of the recovery program that included small groups, worship, counselling, and arranging follow up programs for those who had surrendered. It was great to see God work in the midst of the chaos for his purposes of restoration and wholeness.

The Grass Roots Ark Centre was technically open from Tuesday to Saturday, but that didn’t stop the kids from pouring into the yard on other days and outside of hours. During the afternoon hours, there were games and sports. Later as evening would approach the kids heard about how to follow Jesus. Sundays the youth often piled into the Ark’s van to join them as they visited different local churches.

The Ark Tacloban partnered with YWAM Tacloban and a few of the local churches.

Ark Tacloban has closed now. It was located close to the no build zone, where the target youth lived. Now the government has relocated the people in the no build zone in an effort to make it safer and cleaner. This left the youth centre without youth. Ron and Glenda felt it was time to close. But seeds were planted and lives were touched by the youth centre that ran for 2 years and it has accomplished its purpose. 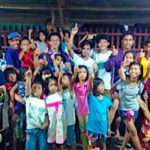