With a nudge from God, Ron and Glenda left for the Philippines in February to see if what could be done to help in the typhoon devastated areas. Typhoon Haiyan (or Yolando as it is called in the Philippines) destroyed cities and towns and left several thousand dead in its wake. Not only were the winds of this super storm beyond comprehension at 380 kph, but the resulting storm surge swept inland and filled homes up to the second floor.

We arrived to find restoration underway the people determined and still pleasant to be with in spite of the enormity of trauma that everyone has suffered. No one was left unscathed by the devastation. Many had their loved ones swept away and their homes demolished.

June 2014 the Ark will move into this area to begin a work known as Grass Roots Ark Ministries. Isaac and Chavah will be the pioneers, checking to see the best place to begin and renting a building to get started.

The initial thrust will include ministry to children and youth, bible studies and teachings, simple getting to know the people and hopefully physically helping to rebuild homes and lives.

Whether or not we will open a children’s home is yet to be seen. We are trying to be sensitive to God’s guidance.

Just yesterday on the news in Tacloban we read that the police did a sting on an apparent relief organization discovered carrying off young girls 12 to 15 years old. They have been charged with trafficking.
The storm victims are vulnerable and this is the time they need our help.

The Ark has been running for a year and a half in the northern part of the Philippines. We got off to a slow start but when Kevin Fegcan signed on, we watched as his passion for Jesus brought new life and vision into the ministry. 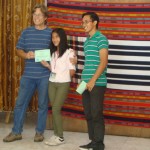 The programs he’s set up have allowed him to be involved in the lives of several youth and children and it is our hope that many will come to know the Lord.